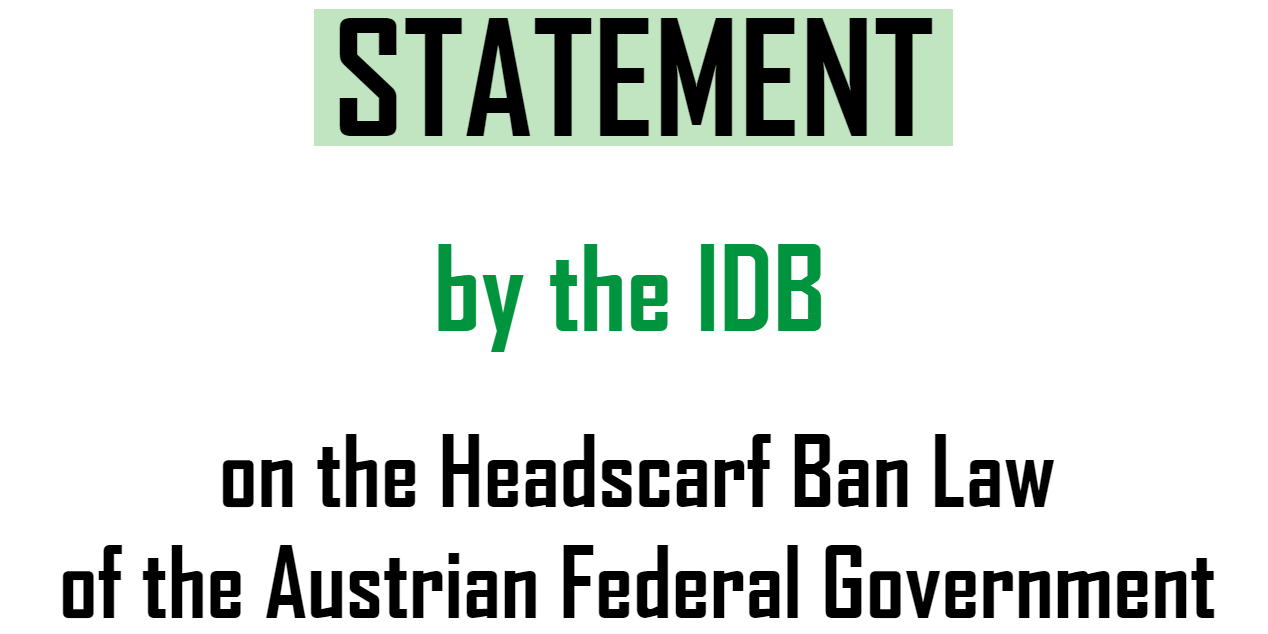 Statement by the Initiative for a Non-discriminatory Education System (IDB) on
the Headscarf Ban Law of the Austrian Federal Government.

On May 8 th , 2019, during a simple legal ruling of the Education Committee of the
National Council, the governing parties OEVP and FPOE, finalized the
headscarf ban for elementary schools; one week later on Wednesday, the 15 th of
May, this decision was officially decided in the National Council. This ruling affects
only Muslim girls up to their 11th birthday, whereas, the Jewish Kippa and Patka of
the Sikhs are not included in the ban.
The IDB pointed out, months ago, in reference to the planned headscarf ban law,
that this law is neither compliant with children rights nor human rights and constitutes
discrimination against the effected female pupils.
For more than three years, the IDB has been demanding the unrestricted
implementation of the UN Convention on Children Rights and the European
Convention on Human Rights. The Austrian government, however, has taken a
different approach with this law, by pouring discrimination into law, which constitutes a grave violation of human rights.
The monitoring body, the UN Child Rights Convention states in its latest publication,
‚Religious Freedom of Children in Classrooms‘ that:
“The human rights of children also apply in educational institutions. This
also includes the freedom of religion; it should be noted that for children religion and
religious affiliation can also be of relevance for their identity.
Art. 29 Art. I is legally binding for the educational institutions.
Art. 29 Art. I lit.
d) UN-CRC: This article establishes the compulsory educational goal of preparing children
for a responsible life in a free society, in an atmosphere of common understanding
and tolerance among all religious groups and others. From this follows the
obligation of the school environment to provide a framework to enable diversity also
in regard to religion.
In Art. 29 Art. I lit. d) UN CRC makes it clear that even in school
spaces there is no scope for restricting the right to freedom of religion – this applies
equally to the religious freedom of male and female students, as well as male and
female teachers.
The practice of religion can manifest itself differently; the wearing of symbols as
well as clothing on religious motivation is also part of it.
With regard to some religious practices – such as the wearing of a headscarf – it is
often argued that this is not understood as a mandatory commandment by the
respective religious doctrine. The State, however, must not assume any kind of
authority to interpret a religious doctrine. According to the European Court of Human
Rights (ECHR) and the United Nations Human Rights Committee, those affected
merely have to plausibly state a religious motivation in order to classify a behavior within the scope of religious freedom.
The UN Committee on the Rights of the Child has already stated that headscarf bans
in schools prevent the full achievement of the right to religious freedom of the
children.
A norm banning headscarves violates the right to religious freedom of children who voluntarily
wear a headscarf and may further impair the right to education and/or the right to
equal opportunities for access to education, which would lead to exclusion and
marginalization, and thus promote discrimination.“

IDB therefore calls on the Austrian federal government to distance themselves
from (refrain from implementing?) this clearly discriminatory and child-violent law
amendment! Similarly, we call on all opposition parties not to downplay this
amendment ’symbolic politics‘.